“Then I (looked and I) saw a solitary eagle flying in mid heaven.” Revelation 8:13

Few creatures have inspired man to the same extent as the eagle.

The bird rarely fails to stir the passion of anyone who has observed it soaring aloft with its awesome profile, its huge wingspan, its legendary boldness, its mastery of flight and above all, its command of the thermal currents.

Throughout the world the eagle has long been accepted as a symbol of valour, boldness, majesty, nobility and invincibility. I love eagles; they are my favourite birds. I remember vividly one encounter that changed my life, it happened shortly after we had lost our home in the devastating cyclone of 1974.

A thunderbolt of lightning flashed vividly across the dark sky, its terrifying crash sending the neighbourhood children scurrying indoors.

Dark foreboding clouds rolled across the bay like some giant, sinister, wave of evil. They swirled low to the ground adding dramatically to the already eerie effect. Again a flash of lightning streaked the sky, striking the earth with such devastating power that it caused the house to tremble under the impact.

Large drops of rain spattered against my face as the wind increased in intensity, the stately slender palm trees of the tropics bowing in tribute before the onslaught. Branches whisked aloft, trees groaned while leaves and debris shot skyward like miniature flying carpets.

A flock of terror-stricken birds wheeled and darted about as they fled, desperate to escape the fury of the storm, their shrill cries of panic barely audible above the turbulence. All creation seemingly stood in fear of the menacing black juggernaut as it thundered towards the spot where I stood.

A flight of water birds huddled nervously behind a barrier of mangroves, while overhead in the dense green canopy, their larger counterparts, the stately white egrets, flapped about in a futile effort to maintain their balance.

And then I saw him! A sight that thrilled my heart. 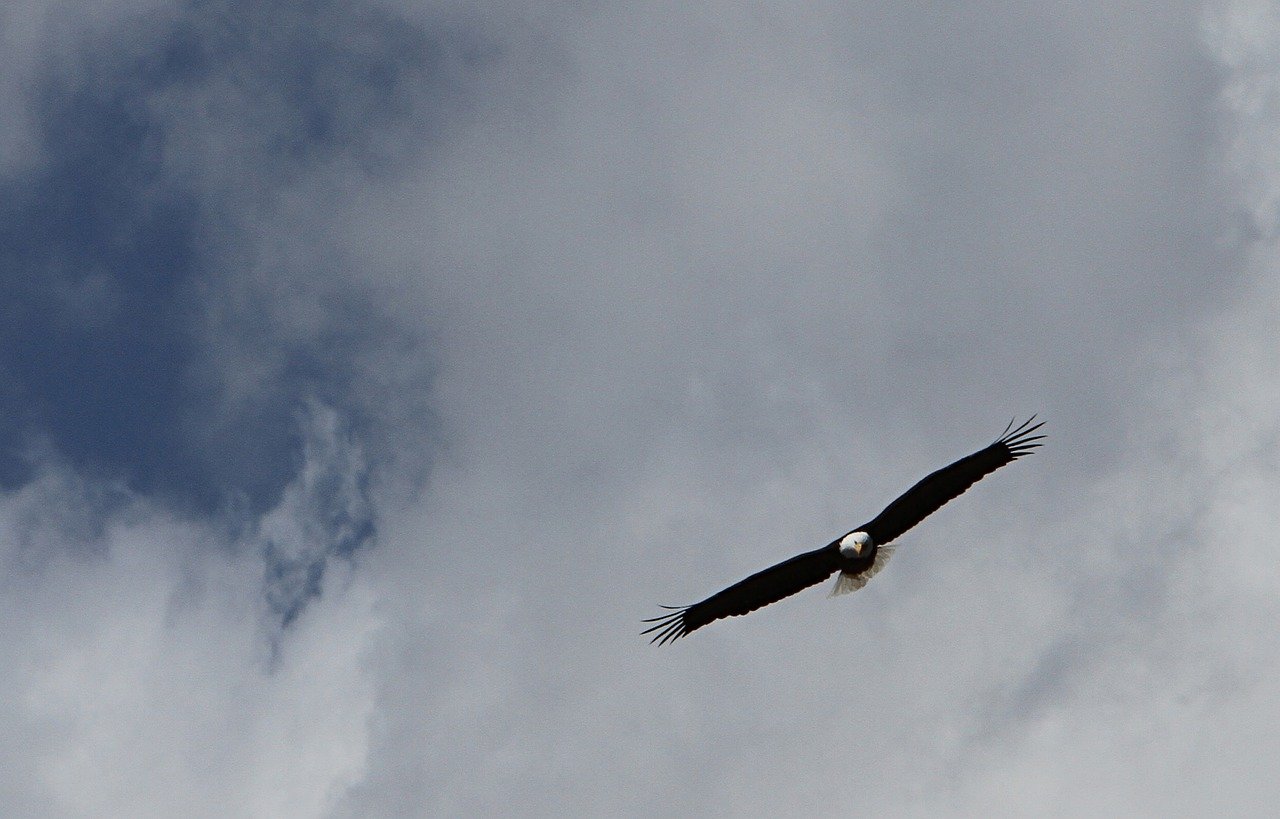 A chance glance into the heavens and there he was…a magnificent white-breasted sea eagle, literally poetry in motion, as he soared nonchalantly against the backdrop of storm clouds.

Momentarily I forgot the ferocity of the squall as I stood in awe of this magnificent creature, this winged warrior, watching it whirl and dive amid the flashes of lightning and crashes of thunder.

Here was one creature undaunted, unafraid and unaffected by the sheer ferocity of the elements.

Here was a creature that rather than fight the storm had discovered the secret of harnessing its power.

While smaller birds struggled and flapped against the storm’s might, intimidated by its sheer power, the eagle locked its powerful wings and allowed the wind currents to thrust it aloft. It soared on the very face of the storm with the barest of effort, the merest flip of the wing tips to change direction or compensate for sudden gusts.

Here was the lord of the sky, the king of flight, borne aloft by the very breath of God.

Two things greatly impressed me about this eagle – its utter fearlessness in the very face of such devastating power, and its ability to soar above the turmoil – the confusion, the ferocity it confronted – into the realm of peace. Indeed, the bird’s air of tranquillity appeared to mock the storm, to dare the elements, as it enjoyed the thrill of soaring on the turbulent air currents, sailing above them with grace and control.

I stood there, my eyes riveted to the sky, observing my eagle friend challenging and taunting the power of the elements. I was elated! I wanted to cheer this feathered conqueror!

My heart lifted, I wanted to soar aloft and join this majestic creature. I identified with the eagle, a kinship, a bond, a union that words cannot describe. I stood transfixed. And then a voice spoke inside my heart. “This is how I want you to live!”

I paused to ponder the impact of the message.

Though the storms of life will come, you too can soar above them as the eagle soars above the storms. You can run in terror, you can fight with all your strength and get nowhere, or you can learn to be borne aloft by the Holy Spirit. The wings of God’s matchless grace, faith, prayer and praise. They will lift you above the storm clouds of life into my realm of My peace.

A lump came to my throat as I watched this magnificent bird soar throughout the sky with a display of aerobatics seemingly just for my pleasure.

This was the way my Heavenly Father saw me, how He longed for me to act and react in life’s storms, turbulence and squalls.

In spite of what forces came against me, He wanted me to soar above them, borne aloft by His grace and mercy.

The eagle, to me that day became the symbol of the overcoming Christian, the one creature alive with the boldness, the audacity to stand before this Satanic spawned mass of destruction and remain unmoved by its menacing power. “Are you willing to become one of my eagles?”

The words rose from deep within my heart. “Yes”, I whispered, unsure of just what it might mean but completely enthralled by the analogy.

Eagles were the only birds aloft that day, the fearful and the timid had long since fled the sky.

I don’t know how long I stood there transfixed by this feathered conqueror of the elements. Here was the Biblical analogy of the way to overcome in life. I could see it!

As the dark storms of life come against us, we too have the eagle’s daring and courage to face them head on! We are not alone.

We can lock our wings of faith and trust in the grace of God with all our heart. We too, like the eagle, can be borne aloft by the very forces that sought to destroy us. The power of the Holy Spirit – the very breath of God Himself will lift us above the Satanic storms of life.

Author Information
Col Stringer ministers with a powerful anointing and is in great demand to speak at churches and conventions all over the world. Col’s unique background of wildlife and humour have won for him the title of “Pastor Crocodile Dundee”.  He is also a successful author of 20 Christian books. His book ‘On Eagles Wings’ has become an international best seller.