When I first went to theological college (as a 25 year old), students were ‘under the thumb’. We always addressed our lecturers by their titles and stood up when they entered the room. There were numerous rules about what you could wear, when you had to study, and what you could do with your free time. So we submitted … mostly.

Well, times have changed. These days, personal freedom is prized and institutions and rules are regarded with suspicion. We’ve learned a lot about grace in the last 50 years and we’re far more sensitive to the dangers of abuse of authority and legalism. These are all good advances. But it does mean that people are far more wary of submission.

So what happens when you find yourself being asked to conform or submit to someone or something that you don’t like? The challenge could come from a difficult supervisor at work, an antiquated church system, an obstinate partner, an unsympathetic team leader, or some set of rules or regulations that don’t make sense.

It certainly happens. You want to try something new in ministry or in the workplace and your leader says, ‘No’. You don’t want to run a program, but you are told that you must. You have a vision that keeps getting blocked by the organisation. You are told to change a behaviour that you think is perfectly appropriate. You are told to wear shoes on stage. The list goes on.

Many people feel that submission is a dirty word; that it shows lack of character and backbone. They think that when you submit, you are giving up your ideals and freedom; that you are better off walking away than weakly yielding.

I’m sympathetic, but I believe this is a huge and dangerous mistake. Here’s my ‘mantra’ (that’s probably not the best word to use): ‘You cannot have spiritual authority if you cannot submit to spiritual authority.’
Okay, I know I’m part of an older generation, but don’t write me off just yet. I’ll try to explain and justify this foundational principle.

How does this work?

I’ve been reading through Romans. After working through the whole theology of grace, Paul writes (Romans 13:1-2): ‘Everyone must submit themselves to the governing authorities, for there is no authority except that which God has established. Consequently, those who rebel against the authority are rebelling against what God has instituted, and those who do so will bring judgement on themselves.’ 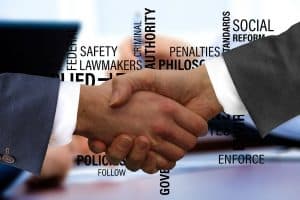 Now submission to government is not all that hard to do in a nation with reasonably just laws like Australia. But the Roman Empire was suspicious of Christians and often persecuted them. So here is Paul encouraging Christians to submit to a heathen, antagonistic government with some very unjust laws for Christians.

The principle is this. God puts certain authorities in our lives (bosses, church leaders, governments, family leaders, etc.). They are accountable to God for the exercise of this authority and our role is to submit. Now, of course, there will be extreme situations in which submission is not possible (see below), but this does not negate the principle. In submitting to those in authority, we are submitting to God.

Do I like this? No, at least not when I disagree with the person in authority over me. I’m very happy to submit when those in authority have got it right, that is, they agree with me. But when they make stupid decisions, or can’t see my viewpoint, or push me around, or limit my creativity, or show their prejudices, or get hung up on the minutiae, then everything in me says, ‘Why should I submit? It’s just dumb.’

But God says, ‘Do it! Submit! This is my worry not yours. I’ve put this person in authority.

Fight those in authority and you’re actually fighting me.’ And the strange thing is that, as I humble myself and submit (sometimes through gritted teeth), I actually gain respect and spiritual authority. It has something to do with the story Jesus told about those seeking the best seats getting demoted, and those putting themselves at the bottom, surprisingly finding themselves at the head of the table (Luke 14:8-11).

But there are limits to submission

But what about the persecuted church disobeying the government? There is plenty of historical evidence of the church not submitting to civil authority. What about the danger of abuse? What about ‘little Hitlers’ in authority? Jesus did largely submit to the Roman authorities, but he didn’t appear to submit to the Jewish religious leaders and their demands.
Now that I’ve firmly established the principle, let me talk about what I see as some exceptions to the principle of submission to authority.

I’m not sure that we should be too concerned about personal injustice, but when submitting to authority will mean injustice for others, then we need to think carefully. I would resist if our governing board wanted me to implement a policy that I saw as unjust for our students.

Some people are abusers and they need to be resisted. Those who would bully or misuse their authority for their own advantage are not acting responsibly in their God-given role. I’m not talking about those who make poor calls or are somewhat difficult, but those who systematically abuse their power.

If the person in authority insists that we do something that compromises biblical moral values, we should resist. This is an important time to make a stand. Christians must be people of character.

We should not submit when submission would mean violating values that are at the core of our calling and life. However, be careful about this. Some people see everything with which they disagree as being a violation of their core values. If this is the case for you, it is likely that you’re just strong-willed and spiritually immature; not principled.

So there are a few situations in which we may not be able to submit to authority, but the general principle is to submit to those God places in authority over us. May God give you grace to submit when it goes against the grain, and may your own spiritual authority continue

Learning about Leadership from Donald Trump

With many other Aussies, I have watched with amazement the rise of Donald Trump as a politician. [Read More…]

Initially, the idea of God blessing us for serving him appears to be out of keeping with the call to sacrificially follow Christ. Christians have no need to constantly look for rewards for the sacrifices [Read More…]

Recently, I received an anonymous letter lamenting (among a number of things) the lack of a tie (or was it a suit and tie?) in a photo [Read More…]